We are committed to continuously improving access to our goods and services by individuals with disabilities. This website is currently being updated to enhance the usability and experience for persons with disabilities. If you are unable to use any aspect of this website because of a disability, please call 9786884721 and we will provide you with prompt personalized assistance.
Jan 27 0 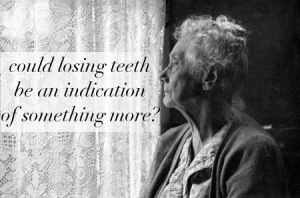 The Journal of the American Geriatrics Society recently published a study that showed people aged 60+ who had none of their own teeth performed worse in memory and walking tests than people who still retained their own teeth.

Even after adjusting for a myriad of variation in behavior, like sociodemographics, existing health conditions, physical health, smoking, drinking, depression, and socioeconomic status, people who didn’t have their own teeth still performed slower than those with teeth.

Now, this doesn’t mean that if you are missing a few teeth you should worry about suddenly developing mental problems—it’s just a good indicator of decline that should be noted in older adults. It’s just another reason to keep up healthy oral habits life-long.

You can read more about the study here.

The information presented here is not intended or implied to be medical advice, diagnosis, or treatment. It should be used for informational purposes only.